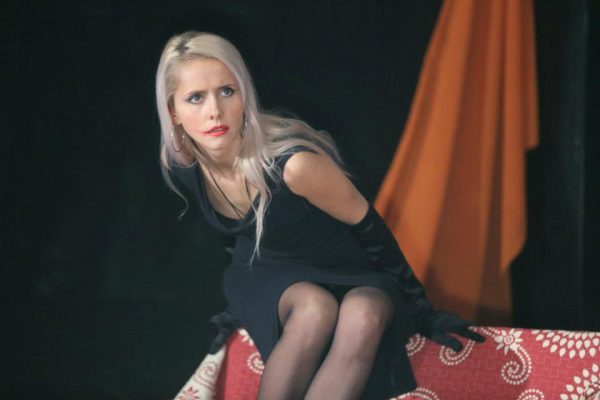 Alex’s most popular play 10,000 cigarettes was first produced at the Seymour Centre in Sydney, Australia as part of Short+Sweet Sydney 2006 on February 25th, 2006 with the following cast: Jasmin de Main, Albany Dighton, Michelle Kavanagh and Caroline McQuade. The production was directed by Adam Gelin. It has since gone on to over 300 productions worldwide in over thirty countries including Australia, Canada, Chile, India, Japan, Malaysia, New Zealand, Philippines, Singapore, South Africa, Taiwan, the United Kingdom and over 40 states in the USA. Pictured is the deWel Atelier de Theatre production in Almaty, Kazakhstan in 2012, directed by Anton Doukravets and performed by Julie Kozhomina, Olga Makarova, Marie Kalinina, Madina Ushbaeva and Evgueni Plokhikh. 10,000 Cigarettes is published by Heuer Publishing. To purchase a copy please visit www.hitplays.com

“I’m standing in the entry hall of Le Palais de Cigarette and a butler – very regal, English accent – with a voice that sounds like vintage port meets Golden syrup – greets me. He bears an engraved silver tray and on the tray is one lone cigarette and a silver lighter. Now at first I’m a little less than pleased by this. “One cigarette – is that it ?” But I have no need to worry.” Cigarettes. One is too many, ten thousand never enough. Or is it ?