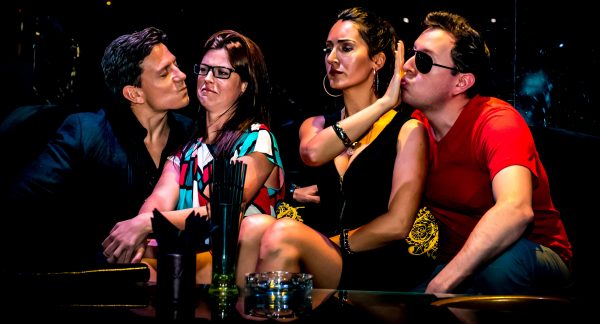 Alex’s most produced full-length play. Critics all over the globe have raved about this hysterical insight into the lighter (and darker) side of modern dating, as a minimum of four talented actors bring to life a myriad of “pick-uppers” and “pick-uppees” in every possible combination. There’s twosomes, threesomes and even foursomes. Pick-ups in high-class bars and seedy nightclubs, restaurants and theatres – even in bathrooms. There’s lines everybody knows and some you wish you never knew. Lines that are being trotted out in nightspots all over your city tonight. A virtual encyclopedia about the art of scoring big… and striking out! A night on the town will never be the same again. “Love is the drug and I need to score.”

NOMINATED FOR VITA AWARD FOR BEST PLAY IN SOUTH AFRICA After traversing three continents and thrilling audiences from Birmingham to Cape Town since it first premiered at the Bondi Pavilion Theatre in 1993, the outrageous international comedy hit Pick Ups was nominated for the Vita Award for Best Play in South Africa in 1998 – and has since gone on to over 20 productions across the globe. “Hilarious!” – Daily Telegraph; “A truly remarkable piece of theatre.” – Natal Mercury; “Like a Quentin Tarantino movie on stage.” – Time Out, London; “Great lines… an insight into the mating game.” – On the Street; “Wrings out the laughs.” – Sydney Morning Herald. Pick Ups was first presented by The Summer of Love Theatre Company at the Bondi Pavilion in Sydney, Australia in January 1993. The production was directed by Christopher Cummings and performed by Felix Williamson, Marta Dusseldorp, Damien Cudmore and Heather Simpson.