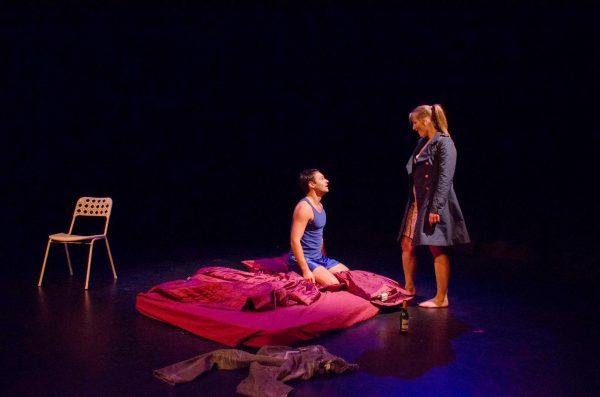 Claire wakes up on Sunday morning next to Matthew, who is definitely “not her type”. Her memories of the night before are hazy, to say the least, and she tries to leave quickly; but Matthew has another solution. A story of romantic possibilities.

Saturday Night Newtown, Sunday Morning Enmore was first produced as part of Short+Sweet Sydney in January 2002 at the Newtown Theatre in Sydney, Australia directed by Mark Cleary. It was filmed by More Sauce Productions, directed by Christopher Johnson and broadcast on Movie Extra in Australia as part of Project Greenlight Australia Series 2 in 2006 and again in the UK by Sky Arts for Bite-Sized Theatre under the title Saturday Night/Sunday Morning with Katie Grace-Cooper and Richard Staplehurst, directed by Nick Brice. Pictured is the production as part of Short but not so Sweet at the Mechanics Institute, Brunswick, Victoria, Australia in 2012, directed by Noel Anderson.